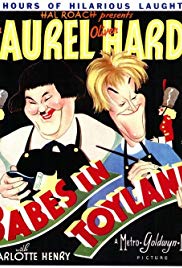 Babes in Toyland or March of the Wooden Soldiers is a Laurel and Hardy musical film released on November 30, 1934. The film is also known by its alternate titles Laurel and Hardy in Toyland, Revenge Is Sweet (the 1948 European reissue title), March of the Wooden Soldiers and Wooden Soldiers (in the United States).Stannie Dum (Stan Laurel) and Ollie Dee (Oliver Hardy), live in a shoe (as in the nursery rhyme There Was An Old Woman Who Lived In A Shoe), along with Mother Peep (the Old Woman), Bo Peep (Charlotte Henry), a mouse resembling Mickey Mouse (and actually played by a live monkey in a costume), and many other children. The mortgage on the shoe is owned by the villainous Silas Barnaby (Henry Brandon), who is looking to marry Bo Peep. Knowing the Widow Peep is having a difficult time paying the mortgage, Barnaby offers the old woman an ultimatum – unless Bo Peep agrees to marry him he will foreclose on the shoe…