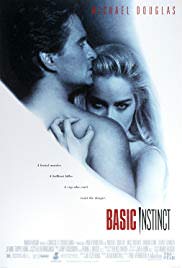 Basic Instinct is a 1992 neo-noir erotic thriller film directed by Paul Verhoeven and written by Joe Eszterhas, and starring Michael Douglas and Sharon Stone. The film follows a police detective, Nick Curran (Douglas), who is investigating the brutal murder of a wealthy rock star. During the investigation Curran becomes involved in a torrid and intense relationship with the prime suspect, Catherine Tramell (Stone), an enigmatic writer.A retired rock star, Johnny Boz, is stabbed to death with an ice pick during sex by a mysterious blonde woman at his apartment. Homicide detective Nick Curran investigates, and the only suspect is Catherine Tramell, Boz’s bisexual girlfriend and a crime novelist who has written a novel that mirrors the crime…