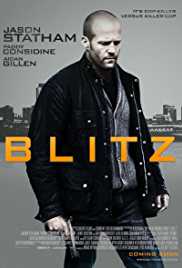 Blitz is a 2011 British crime thriller film directed by Elliott Lester, starring Jason Statham, Paddy Considine, Aidan Gillen and David Morrissey. The film was released in the United Kingdom on 20 May 2011. The film is based on the novel of the same name by Ken Bruen, which features his recurring characters Detective Sergeant Tom Brant and Chief Inspector James Roberts.A serial killer is targeting police officers in South East London. After two police constables are shot dead and Chief Inspector Bruce Roberts (Rylance) is bludgeoned to death, the hunt for his identity begins.