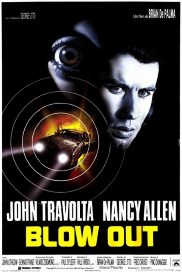 Blow Out is a 1981 American neo-noir political thriller film written and directed by Brian De Palma. The film stars John Travolta as Jack Terry, a movie sound effects technician from Philadelphia who, while recording sounds for a low-budget slasher film, serendipitously captures audio evidence of an assassination involving a presidential hopeful. Nancy Allen stars as Sally Bedina, a young woman involved in the crime. The supporting cast includes John Lithgow and Dennis Franz. The film’s tagline in advertisements was, “Murder has a sound all of its own”.