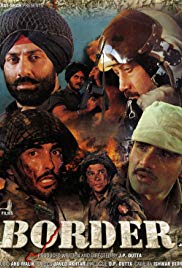 Border is a 1997 Indian war film based on the Battle of Longewala during the Indo-Pakistani War of 1971, produced and directed by J. P. Dutta. The film starred an ensemble cast of Sunny Deol, Sunil Shetty, Akshaye Khanna and Jackie Shroff in pivotal roles. The film is an adaptation from real life events that happened at the Battle of Longewala during the Indo-Pakistani War of 1971. The film was screened retrospectively on 13 August 2016 at the Independence Day Film Festival, jointly presented by the Indian Directorate of Film Festivals and Ministry of Defense, commemorating the 70th Indian Independence Day. It was the second highest grossing Bollywood film of the year worldwide behind Dil To Pagal Hai and highest-grossing film of the year in India .