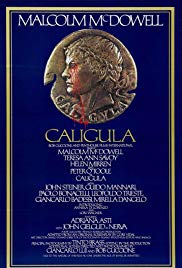 Caligula (Italian: Caligola) is a 1979 Italian-American erotic epic historical drama film focusing on the rise and fall of the Roman Emperor Caligula. It stars Malcolm McDowell, Teresa Ann Savoy, Helen Mirren, Peter O’Toole, John Steiner and John Gielgud. It is the only feature film produced by the men’s magazine Penthouse.Caligula is the young heir to the throne of his great uncle, the Emperor Tiberius. One morning, a blackbird flies into his room; Caligula considers this a bad omen. Shortly afterward, the head of the Praetorian Guard, Macro, tells Caligula that Tiberius demands his immediate presence at Capri, where the Emperor lives with his close friend Nerva, a dim-witted relative Claudius, and Caligula’s younger stepbrother Gemellus. Fearing assassination, Caligula is afraid to leave but his sister and lover Drusilla persuades him to go…