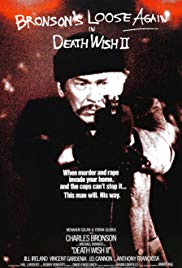 Death Wish II is a 1982 American vigilante action film directed and co-edited by the English filmmaker Michael Winner. It is the first of four sequels to the 1974 film Death Wish. In the story, architect Paul Kersey (Charles Bronson) moves to Los Angeles with his daughter (Robin Sherwood). After his daughter is murdered at the hands of several gang members, Kersey is once again forced to become a vigilante. Unlike the original, in which he hunts down every criminal he encounters, Kersey only pursues his family’s attackers. The sequel makes a complete breakaway from the Brian Garfield novels Death Wish and Death Sentence, redefining the Paul Kersey character.