Info: Ads can be pain, but they are the only source to maintain website. Kindly Disable Adblocks.
HD Movies Point > Newly Added > Year > 2001 > Dil Chahta Hai (2001) 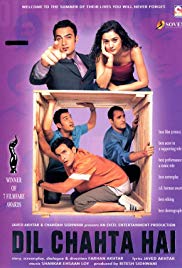 Dil Chahta Hai is a 2001 Indian comedy-drama film starring Aamir Khan, Akshaye Khanna, Saif Ali Khan, Preity Zinta, Sonali Kulkarni and Dimple Kapadia. The first film written and directed by Farhan Akhtar, it is set in modern-day urban Mumbai and Sydney, and focuses on a major period of transition in the lives of three young friends.Akash (Aamir Khan), Sameer (Saif Ali Khan), and Sid (Akshaye Khanna) are the best of friends in college. After an eventful graduation party where Akash gets slapped upon hitting on a beautiful girl and Sameer, being tricked by Akash, gets dumped by his girlfriend, they go on a trip together to Goa. Here, Sameer tries to get over his ex-girlfriend while Akash continues to escape from a girl who loves him deeply. When they return, Sid bonds with Tara (Dimple Kapadia), an older woman he befriended when she moved into the neighborhood. She shares and understands his love for painting, and soon he asks her to be one of his muses