Info: Ads can be pain, but they are the only source to maintain website. Kindly Disable Adblocks.
HD Movies Point > Newly Added > Year > 2015 > Eddie the Eagle (2015) 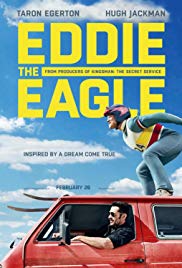 Eddie the Eagle is a 2016 British biographical sports comedy-drama film directed by Dexter Fletcher. The film stars Taron Egerton as Michael Edwards, a British skier who in 1988 became the first competitor to represent Great Britain in Olympic ski jumping since 1928. Hugh Jackman, Christopher Walken, Iris Berben and Jim Broadbent co-star. The film had its world premiere at the 2016 Sundance Film Festival on 26 January 2016.