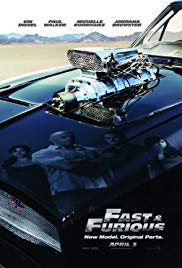 Fast & Furious (aka The Fast and the Furious 4, or Fast & Furious 4) is a 2009 American action film directed by Justin Lin and written by Chris Morgan. It is the fourth installment of The Fast and the Furious franchise. The film, which stars Vin Diesel, Paul Walker, Michelle Rodriguez, and Jordana Brewster, is set between the second and third installments and bridges from the first film into a present-day setting, with main members of the original cast reprising their roles. Originally released on April 3, 2009, it received negative reviews upon release, but was a box office success grossing $363 million worldwide. It was followed by Fast Five in 2011.