Info: Ads can be pain, but they are the only source to maintain website. Kindly Disable Adblocks.
HD Movies Point > Newly Added > Year > 2001 > Final Fantasy: The Spirits Within (2001) 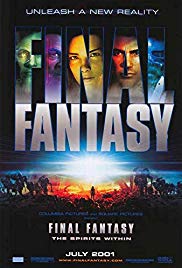 Final Fantasy: The Spirits Within is a 2001 American computer-animated science fiction film directed by Hironobu Sakaguchi, creator of the Final Fantasy series of role-playing video games. It was the first photorealistic computer-animated feature film and was the most expensive video game-inspired film until the release of Prince of Persia in 2010. It features the voices of Ming-Na Wen, Alec Baldwin, Donald Sutherland, James Woods, Ving Rhames, Peri Gilpin and Steve Buscemi.The Spirits Within follows scientists Aki Ross and Doctor Sid in their efforts to free a post-apocalyptic Earth from a mysterious and deadly alien race known as the Phantoms, which has driven the remnants of humanity into “barrier cities”. Aki and Sid must fight against General Hein, who wishes to use more violent means to end the conflict.

Final Fantasy: The Spirits Within (2001) Details