Info: Ads can be pain, but they are the only source to maintain website. Kindly Disable Adblocks.
HD Movies Point > Newly Added > Year > 2016 > Finding Dory (2016) 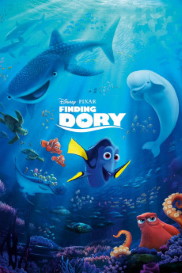 Finding Dory is a 2016 American 3D computer-animated comedy adventure film produced by Pixar Animation Studios and released by Walt Disney Pictures. Directed and co-written by Andrew Stanton with co-direction by Angus MacLane, the screenplay was co-written by Victoria Strouse and Stanton. The film is the sequel and spinoff to 2003’s Finding Nemo and features the reprised voices of Ellen DeGeneres and Albert Brooks, as well as the new voices of Hayden Rolence (replacing Alexander Gould), Ed O’Neill, Kaitlin Olson, Ty Burrell, Diane Keaton and Eugene Levy. Finding Dory focuses on the amnesiac fish Dory, who journeys to be reunited with her parents. Along the way, she is captured and taken to a California public aquarium, from which Marlin and Nemo attempt to rescue her.