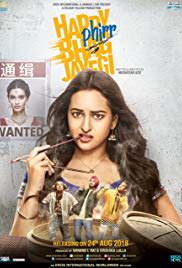 Happy Phirr Bhag Jayegi is a Bollywood comedy film directed by Mudassar Aziz and produced by Aanand L. Rai and Krishika Lulla. The film is a sequel to the 2016 film Happy Bhag Jayegi. It stars Diana Penty as the eponymous character from the first film and Sonakshi Sinha as her namesake. The production features an ensemble cast consisting of Penty, Sinha, Jimmy Sheirgill, Piyush Mishra, Ali Fazal, and Jassi Gill. The film was released on 24 August 2018 with mixed reviews from critics.