Info: Ads can be pain, but they are the only source to maintain website. Kindly Disable Adblocks.
HD Movies Point > Newly Added > Year > 2018 > Helicopter Eela (2018) 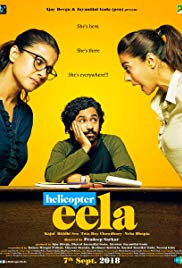 Helicopter Eela is a 2018 Indian Hindi-language film directed by Pradeep Sarkar. It features Kajol in the lead role as an aspiring singer and single mother and is written by Mitesh Shah and Anand Gandhi. It is based on the Gujarati play Beta, Kaagdo, written by Anand Gandhi.Eela a single mother rejoins her college to complete her education after 22 years. In flashback its shown that she is a upcoming partially famous model/singer, who records songs written by her boyfriend Arun. When she is recording for a career breaking song for a Mukesh Bhatt’s project, The project gets cancelled indefinately. So she and her boyfriend decides to get married. After few months its shown tha she gives birth to a boy Vivaan. while seeing their family tree Eela and Arun realise that all the members of Arun’s family sidd have died in their late 30s.