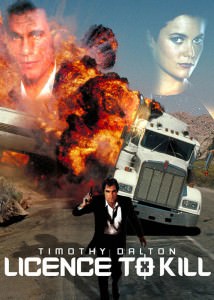 Licence to Kill (1989) is the sixteenth spy film in the James Bond film series by Eon Productions, and the first one not to use the title of an Ian Fleming story. It is the fifth and final consecutive Bond film to be directed by John Glen. It also marks Timothy Dalton’s second and final performance in the role of James Bond. The story has elements of two Ian Fleming short stories and a novel, interwoven with aspects from Japanese Rōnin tales. The film sees Bond being suspended from MI6 as he pursues drugs lord Franz Sanchez, who has ordered an attack against his CIA friend Felix Leiter and a rape and murder on Felix’s wife during their honeymoon. Originally titled Licence Revoked in line with the plot, the name was changed during post-production because too many people did not know what revoked meant.