Info: Ads can be pain, but they are the only source to maintain website. Kindly Disable Adblocks.
HD Movies Point > Newly Added > Year > 1981-1990 > Lonesome Dove Season 01 All Episodes 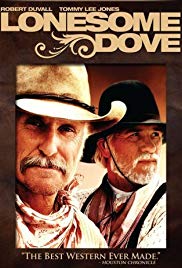 Lonesome Dove is an American epic Western adventure television miniseries directed by Simon Wincer. It is a four-part adaptation of the 1985 novel of the same name by Larry McMurtry and is the first installment in the Lonesome Dove series. The novel was based upon a screenplay by Peter Bogdanovich and McMurtry, intended to star John Wayne, James Stewart and Henry Fonda, but the film was never made after John Ford advised Wayne against it. The eventual television miniseries stars Robert Duvall and Tommy Lee Jones. The series was originally broadcast by CBS from February 5 to 8, 1989, drawing a huge viewing audience, earning numerous awards, and reviving both the television western and the miniseries.