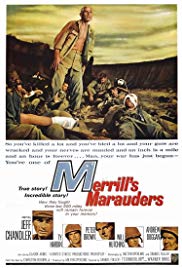 Merrill’s Marauders is a 1962 Technicolor war film, photographed in Panavision, and directed and co-written by Samuel Fuller. It is based on the exploits of the long range penetration jungle warfare unit of the same name in the Burma Campaign, culminating in the Siege of Myitkyina.The film begins with off-screen narration over black-and-white historical footage of the World War II Burmese campaign, including mention of all American allies who participated. The film then segues into Technicolor as we observe Lt. Stockton’s (Ty Hardin) platoon moving through the jungle toward their first objective, the Japanese-held town of Walawbum. After Stockton radios Gen. Merrill (Jeff Chandler) that they are nearing their goal, he and the rest of the brigade carry out a successful raid. 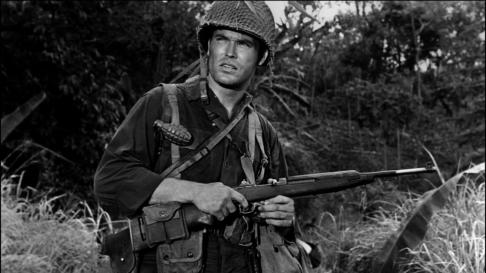