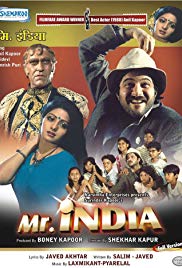 Mr. India is a 1987 Indian science fiction film directed by Shekhar Kapur, with a screenplay written by Salim-Javed. It stars Sridevi and Anil Kapoor in the lead roles. Amrish Puri, Ashok Kumar, Satish Kaushik, Ajit Vachani and Sharat Saxena are featured in supporting roles.Mogambo (Amrish Puri) is a brilliant yet insane retired Army General whose goal is to conquer India. From his remote hidden island, he monitors all the evil-doings perpetrated by his henchmen. All of his subordinates know the formal salute “Hail Mogambo!”, emphasising his complete authority over his minions. Arun Verma (Anil Kapoor) is an orphan, a street violinist and philanthropist who rents a large, old house in which he houses ten orphaned children and takes care of them with the help of his cook/ caretaker Calendar (Satish Kaushik).