Info: Ads can be pain, but they are the only source to maintain website. Kindly Disable Adblocks.
HD Movies Point > Newly Added > Year > 2016 > Phantasm: Ravager (2016) 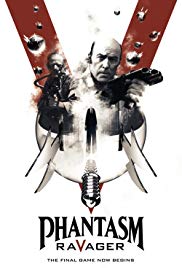 Phantasm: Ravager (also known as Phantasm V or Phantasm V: Ravager) is a 2016 American horror film, and the fifth and final installment in the Phantasm series. It marks the only film in the series not directed by Don Coscarelli, although he acts as producer and co-writer. It is directed by David Hartman and stars A. Michael Baldwin, Reggie Bannister and Angus Scrimm in his final appearance as The Tall Man…