Info: Ads can be pain, but they are the only source to maintain website. Kindly Disable Adblocks.
HD Movies Point > Newly Added > Year > 2012 > Players (2012) 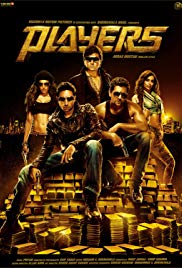 Players is a 2012 Indian heist film directed by duo Abbas and Mustan Burmawalla and jointly produced by Viacom 18 Motion Pictures and Burmawala Partners. The film features an ensemble cast of Bobby Deol, Abhishek Bachchan, Vinod Khanna, Bipasha Basu, Neil Nitin Mukesh, Sonam Kapoor, Sikandar Kher and Omi Vaidya in the lead roles, while Aftab Shivdasani appears in a cameo. The theatrical trailer premiered on 3 November 2011, and the film was released on 6 January 2012. It is an official remake of the 2003 American film The Italian Job, which itself is a remake of the 1969 British film of the same name. Players employs the same plot as the 2003 version, while making the characters and incidents completely different.