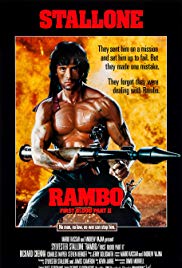 Rambo: First Blood Part II (also known as Rambo II or First Blood II) is a 1985 American action film directed by George P. Cosmatos and starring Sylvester Stallone, who reprises his role as Vietnam veteran John Rambo. It is the sequel to the 1982 film First Blood, and the second installment in the Rambo film series. Picking up where the first film left, the sequel is set in the context of the Vietnam War POW/MIA issue; it sees Rambo released from prison by federal order to document the possible existence of POWs in Vietnam, under the belief that he will find nothing, thus enabling the government to sweep the issue under the rug.A year into his sentence, former commando John Rambo (Sylvester Stallone) is visited by his old commander, Colonel Sam Trautman (Richard Crenna). With the war in Vietnam over, the public has become increasingly concerned over news that a small group of US POWs have been left in enemy custody. To placate their demands for action, the US government has authorized a solo infiltration mission to confirm the reports…