Info: Ads can be pain, but they are the only source to maintain website. Kindly Disable Adblocks.
HD Movies Point > Newly Added > Year > 2011 > Rockstar (2011) 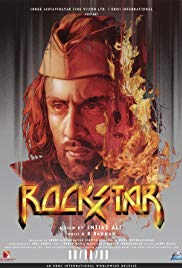 Rockstar is a 2011 Indian musical romantic drama film directed by Imtiaz Ali, starring Ranbir Kapoor and Nargis Fakhri, with music composed by A. R. Rahman. The film also stars Moufid Aziz, Aditi Rao Hydari, Piyush Mishra, Shernaz Patel, Kumud Mishra in supporting roles, and also Shammi Kapoor, who makes his last silver screen appearance. The film was produced by Eros International Ltd. along with Shree Ashtavinayak Cine Vision Ltd. It follows Janardhan Jakhar a.k.a. JJ or Jordan, who dreams of becoming a rockstar like his role model, Jim Morrison. Yet, eventually on attaining all that he dreamt of, Jordan ends up anguished and despondent, by the loss of Heer Kaul, whom he loved passionately and whose illness is inadvertently caused by Jordan himself.