Info: Ads can be pain, but they are the only source to maintain website. Kindly Disable Adblocks.
HD Movies Point > Newly Added > Year > 2008 > Sex and the City (2008) 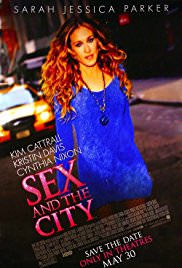 Sex and the City is a 2008 American romantic comedy film written and directed by Michael Patrick King in his feature film directorial debut, and a sequel to the 1998-2004 HBO comedy series of the same name (itself based on the 1997 book of the same name by Candace Bushnell) about four female friends: Carrie Bradshaw (Sarah Jessica Parker), Samantha Jones (Kim Cattrall), Charlotte York Goldenblatt (Kristin Davis), and Miranda Hobbes (Cynthia Nixon) dealing with their lives as single women in New York City. The series often featured frank discussions about romance and sexuality.

Sex and the City (2008) Movie Screenshots