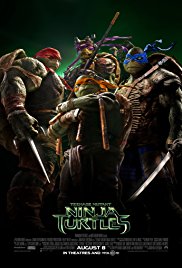 Teenage Mutant Ninja Turtles is a 2014 American superhero film based on the fictional superhero team of the same name. It is the fifth film in the Teenage Mutant Ninja Turtles film series and the first in the reboot series. It features the main characters portrayed by a new cast, and stars Megan Fox, Will Arnett, William Fichtner, Danny Woodburn, Abby Elliott, Noel Fisher, Jeremy Howard, Pete Ploszek and Alan Ritchson, featuring the voices of Johnny Knoxville and Tony Shalhoub. The film was directed by Jonathan Liebesman, written by Josh Appelbaum, André Nemec and Evan Daugherty, The film was announced shortly before Teenage Mutant Ninja Turtles co-creator Peter Laird sold the rights to the characters to Nickelodeon in October 2009.