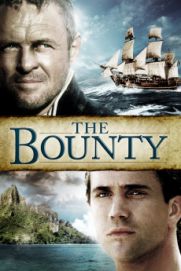 The Bounty is a 1984 British historical drama film directed by Roger Donaldson, starring Mel Gibson and Anthony Hopkins, and produced by Bernard Williams with Dino De Laurentiis as executive producer. It is the fifth film version of the story of the mutiny on the Bounty. The film also features Laurence Olivier, Daniel Day-Lewis and Liam Neeson.The film is set as flashbacks from the court martial at Greenwich of Commanding Lieutenant William Bligh (Anthony Hopkins) for the loss of HMS Bounty to mutineers led by his friend Fletcher Christian (Mel Gibson), during its expedition to Tahiti to gather breadfruit pods for transplantation in the Caribbean.