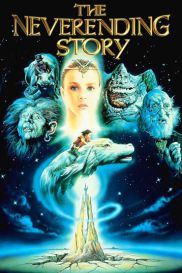 The NeverEnding Story is an English-language West German fantasy film released in 1984, based on the novel of the same name by Michael Ende, about a boy who reads a magical book that tells a story of a young warrior whose task is to stop a dark force called the Nothing from engulfing a mystical world. The film was produced by Bernd Eichinger and Dieter Giessler and directed and co-written by Wolfgang Petersen (his first English-language film) and starred Noah Hathaway, Barret Oliver, Tami Stronach, Patricia Hayes, Sydney Bromley, Gerald McRaney, Moses Gunn, and Alan Oppenheimer as the voices of both Falkor and Gmork (as well as other characters). At the time of its release, it was the most expensive film produced outside the United States or the Soviet Union. The film was the first in The NeverEnding Story film series.