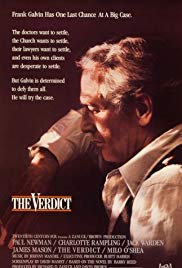 The Verdict is a 1982 American legal drama film directed by Sidney Lumet and written by David Mamet from Barry Reed’s novel of the same name. It stars Paul Newman, Charlotte Rampling, Jack Warden, James Mason, Milo O’Shea, and Lindsay Crouse. In the story, a down-on-his-luck alcoholic lawyer accepts a medical malpractice case to improve his own situation, but discovers along the way that he is doing the right thing.