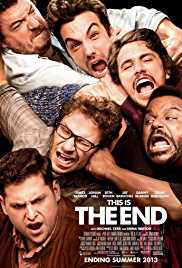 This Is the End is a 2013 American disaster horror comedy film written, co-produced and directed by Seth Rogen and Evan Goldberg in their directorial debuts. Starring Rogen, James Franco, Jonah Hill, Jay Baruchel, Danny McBride and Craig Robinson, the film centers on fictionalized versions of themselves facing a global biblical apocalypse. The film premiered at the Fox Village Theater on June 3, 2013 and was released theatrically in the United States on June 14, 2013 by Columbia Pictures before being re-released on September 6, 2013. The film was a critical and commercial success, grossing $126 million on a $32 million budget.

This Is the End (2013) Movie Screenshots