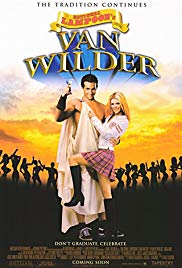 National Lampoon’s Van Wilder (aka Van Wilder: Party Liaison) is a 2002 romantic comedy film directed by Walt Becker and written by Brent Goldberg and David T. Wagner. This movie was inspired by the real life experiences of Bert Kreischer while he attended Florida State University.The film stars Ryan Reynolds as the title character alongside Tara Reid, Kal Penn, and Tim Matheson. National Lampoon’s Van Wilder follows the exploits of its lead character Van Wilder (Ryan Reynolds), a seventh year senior, who has made his life goal in helping undergrads at Coolidge College succeed in life. An article is then written by Gwen Pearson, played by Reid, bringing to light Van Wilders college adventures which attracts the attention of Van’s father, played by Matheson, which leads to his tuition being cut off. Van Wilder becomes embroiled in a relationship between Gwen and her unsavory boyfriend, Richard “Dick” Bagg (Daniel Cosgrove) and his struggle to graduate.